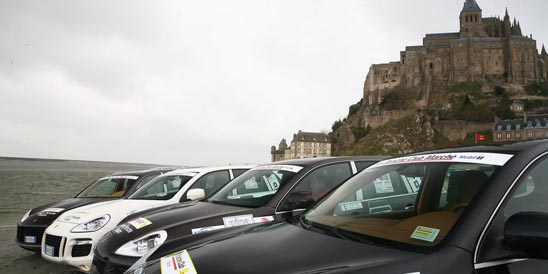 “Test Drive” and this resume in few words what we did during the 4th Cayenne Artic Route.!
We had with us the Cayenne Diesel, new car now available in the market, and really our main commitment has been to let “run”  because we were so curious to see how car was answering.
Two among the major motor magazines (Auto & Fuoristrada, Gente Motori) will publish as exclusive the articles organised by the journalist Marzia Gandini, with results and comments.
Distance covered  7.200 Km in 86 hours drive, motorways, National roads, narrow local roads, gravel roads: car has been excellent and the average consumption has been of 10,5 Km/L.
Certainly the very nice sites we encountered during the trip have contributed to make everything very enjoyable, with the sun that has always been with us, creating the right atmosphere.

New car apart, this year he Participants had the last generation camera of Nikon, with GPS, that allows to position the photo in the location were has been taken and everybody that has in his PC a localization program, can see were we have been.

Firm Kolimat, inventor of the Roadscan (www.roadscan.it) that is a “black box” that takes 6 photos each hour, has memorized entirely step by step our Adventure.

We had two of those, one on the Diesel and one on the Cayenne S, so two different files with different photos and situations.

The Event has been very important not only for those technical solutions, but also because, as always, the Participants had very nice time.
Two new entrances: Carlo and Alberto, that immediately entered in the spirit and of course have contributed positively to the Trip.

From Pesaro to Paris, 750 Miles, took us 11 hours drive until arrival at Porte d’Orleans, then about 90 minutes to the hotel where the journalist, Marzia Gandini was waiting us for the first official photos of the Event.
Next morning, destination Edinburgh, where we arrived at the evening, after 610 Miles drive.
From Edinburgh direction Thurso, on the way we visited William Wallace (Braveheart) castle in Sterling and Lockness lake, where weather condition (fog) has not permitted do se ….the monster, but we have seen Urquart castle.

Direction to the final destination we stopped at Dhalwinnie where we took some photos and then Invergarry, Inverness, Helmsdale, Melvich. We arrived in Thurso at night.

From Thurso we entered one street that arrived to a single lane, so narrow that there are stopping places for let pass cars arriving form other side!
We crossed Durness, Ullapool (visit to the Highlander Castle: Ardweck), Garve, Dornie and finally Oba, a very nice town on the sea.

Next morning, after few miles drive, we got the ferry in Cairnrayan to Larne, the Belfast (Ireland) port for to drive to Coleraine, our final destination.

On the way to hotel, we encountered Ballygally, one gulf with a boat- slide.
We had a very nice light, so we decided to place cars like if they are coming out from sea.

Close to Coleraine there are two “5 stars” places: Dunluce Castle and Giants Causeway.
Both very suggestive but Giants Causeway is incredible!
Basalt columns created by the sea and wind, placed in vertical position that
It is hard to believe is the Nature making those.
Well, we arrived to convince the Director of the site (National Monument!) to let us bring the cars down the place, and the photos we took are wonderful.

At 1 p.m. we start again the drive to Dublin, where we arrived on time to assist to the victory of Ireland in the “6 Nations Rugby Championship” and you can imagine the excitement and confusion we found there!

Early wake up for to get the ferry to UK again (Holyhead). We disembarked at 12 a.m. and we had 400 miles drive to Plymouth where the next ferry has to take us in France, Roscoff.
10 hours drive with a very important stop in Glastonbury for to visit King Artù tomb.

From Roscof to Mont Saint Michel,  nothing special to mention, but when we got there after permission of the Police, we placed our cars under the Abbey and institutional photos have been taken, one of which is the one that opens this article.
Of course we visited the Abbey and after a snack we spent few hours taking photos of the Participants, because it is possible a Magazine (Gente Motori) will publish those.

At that time the Adventure was almost finished; just see the highest bridge in the World, in Millau: 1.100 ft.
At 4 p.m. e had still the time to enter in the Bridge Museum and we also went under the bridge.
A gravel road we decided to test the Diesel, meaning that car has been so performing that an extreme test was necessary  to have the final confirmation: Diesel or Gas the car has the same efficiency and control.

Last shot, long 610 Miles Km from Millau to Pesaro, our Home.
Two cars went to Padova to deliver back the Deisel arriving the next day Home